A Baptism born out of listening and being 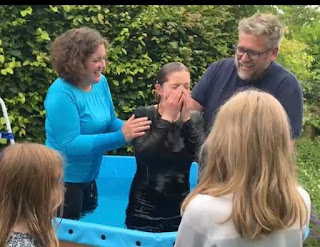 A Baptism born out of listening and being

It was April 2017 when our family moved to Dorset to begin listening to its rural communities.  The method – a kind of dual listening – one ear to God, being reminded of His unchanging promises and coming Kingdom and the other to the community.   As we listened three questions were formed.

2).  What does the biblical imagination have to say to it?

3).  What does it look like for Christians to live together as if the kingdom of God has already come?

The cry of the community became clear quite clearly – division.   Everywhere there was brokenness.   Every activity begun and celebrated soon became broken, split, and ended in pain.   Factions were many.   Community pages riddled with conflict.  And two churches that attempted to church plant had become broken, split, divided and as a result Christianity was something outside the village and ‘banned’ from the village hall.   The biblical imagination led us to renewed emphasis of trinitarian theology – we wanted to answer Jesus’ prayer – ‘may they be one as we are one’.   We saw the village covered in oil, the very presence of God coming as we as a community began to love each other.  We heard Gods calling that as the Christians in the village we were to demonstrate this coming kingdom, by loving the other, disagreeing well and celebrating difference.

The invitations began to come as we listened.  Too many to discuss here.  But for this story I will tell you of the toddler group.   The group was down to very few families, tired and weary leaders and it began to look like this club would go the way of so many others – closure.  Emma was handed the keys, and with other leaders she gathered began to revive the group.  Pre lockdown seeing 80-100 attendees, all in a positive atmosphere where all our celebrated, all is safe, all are welcoming.   It was here that we would first meet Sadie. (back to that in a minute).

Through lots of other invitations – a few of us started to gather for dinner to learn from one another and cheer each other on our Christian journey.   Then lockdown.  Early on, we sensed God, not to rush in and be the saviours of the village but to cheer on and join in the communities’ efforts.  Then after a few months we began a village church Facebook page to discuss all things spiritual as we journeyed through such strange times.  A number of us began to meet online for the first time, to pray, to laugh and to support.   The decision was made that we would all commit to praying and studying and that our online meeting would be sharing what God has said and is doing.   It’s a wonderful place to be.   It’s growing.  It’s beautiful.   All participate.  One of the members described the church as ‘a people from every different background, different places, different theologies, but somehow as we journey together the Holy Spirit helps us fall in love one another.’  I call it glee church – all the ones who don’t fit anywhere else!  Somehow, without trying we were a group of ‘others’, loving one another, a sign to the community who were inviting us to bring the wider community together. Marvellous!

As we continued to listen, a lady came to buy a push chair from us.  It was Sadie from the toddler group.   She said something in her conversation about God – and we felt it right to go back to her and ask if she was a Christian.  She wasn’t sure but was keen to find out more.  She joined our ‘Glee’ church and joined in!  We did an Alpha at her and other requests.  She was filled with the Spirit as we watched the videos meant for the big celebratory weekend.  And we had the privilege of baptising her this Sunday just gone.

No need to be!  It was wonderful. We shared dinner together, we heard Sadie’s testimony and then one after another, members of the group stepped forward to give prophecy, word, and pray for her.  A marvellous golden thread throughout, so obvious that people were hearing from God. We then baptised her before all the kids jumped in the pool to join us all.  It was wonderful.  One member on their return home stated, ‘it was church, how it should be’!

As I reflect – God has done so much – and it has all been done through the posture of listening and joining in with God.  The community are being heard, God’s kingdom is coming, and it is being expressed by a community of saints who live counter to the world.  There is only one person who deserves all the credit – that is God almighty, father, son, and Holy Spirit.  All we have done is tried to listen and find the courage to join in!